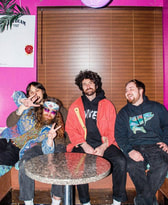 In a land that never was, housed four people that never were. Drifting on the light waves of ghost stars, these cosmic cowboys have but one intention: to create a musical score for the impending interstellar apocalypse.

​Oregon Space Trail of Doom became a whimsical side project for Drummer Tony Kazel, and guitarist Ryan Fletterick back in 2017. Initially hoping to create an acoustic/folk band, they soon realized that their creative ideas couldn't be held back by the limitations of just drums and a guitar, so therefore decided on adding a second guitarist (Nolan Cavano), and a bassist (Nick Yanosko). Now, with a broader scope of musical possibilities they were essentially limitless to whatever writing style they wished to create. After releasing their debut, psych-rock esq, full length album "Into The Wood" in 2019, they solidified themselves as top players in the Cleveland music scene, even being awarded Pressure Life Magazine's Band of The Year. For 2020 they accepted the prestigious Panza Award, which is an accolade given by The John Panza Foundation; a nonprofit aimed at helping local bands thrive within the music industry. For 2021 they again received yet another Panza Award and onward they went. Now, after various tours, a trip to SXSW, endorsements from companies like Earthquaker Pedals, and Voodoo Lab, they now plan on writing copious amounts of music and covering the earth with Doom.