Carlos Jones and the Plus Band 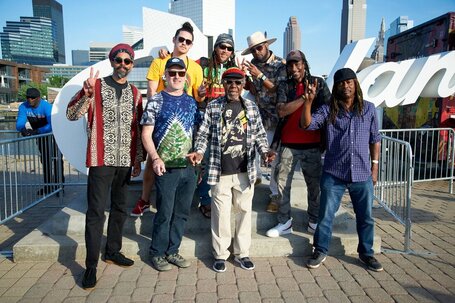 Carlos Jones has been entertaining audiences for over 40 years throughout the eastern half of the United States, first as a member of the roots reggae group “I-Tal”, and then with the legendary “First Light”, before finally pursuing a solo career with his current group – the Peace, Love, Unity Syndicate (aka “PLUS” or “The PLUS Band”).  Choosing to focus on bringing a positive message with his music, Carlos has continued to win a diverse group of new fans everywhere he plays.


With headline performances at Cleveland ROCKSNYEVE, Jamaica's 'JamRock 2010', Idaho's 'Marley in the Mountain Fest', Wade Oval, Painesville Party in the Park, Edgewater LIVE, Warren Amphitheatre, Springfield Amphitheatre, and the Midwest Reggae Festival to name but a few, Carlos Jones and the PLUS Band will be rockin' the house with their unique brand of high energy "put yer dancin' shoes on" reggae. Shākē Ground is the latest project from former members of the
popular American reggae hybrid band, First Light. Their first performance
was in 1984, and during their heyday, they opened for
UB40, Living Colour, The Clash, and many others. First Light worked
steadily from 1985 to 1998, and because of the band’s I-tal roots,
they became known as a reggae band. Their cult classic album
Reggae Meltdown sold more than 12,000 copies without a record
label.
First Light was more than just reggae, and so is Shākē Ground. For
the last ten years or so, the band played with Butchie B and Outlaws
I&I. With more than 40 years of jamming under their belts,
Shākē Ground is no stranger to Cleveland. The band is comprised
of Mike “Chopper” Wasson on guitar/bass and vocals; Gino Long
on guitar/bass and vocals; Ed Marthey on keyboards and backing
vocals; Rodney Reisman on drums; Bob Caruso on percussion;
and Davidione Pearl on horns and backing vocals.